Why Von Miller is Overrated 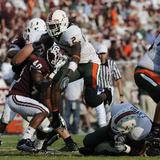 Von Miller is high on almost everybody’s draft board. Both McShay and Kiper have him #2 on their respective big boards. Unlike the “experts” I give Miller a 2nd round grade for the following reasons.
Size: As a 3-4 outside linebacker Miller is grossly undersized. Standing at 6’2 and weighing 237 Miller is too light to play the 7 technique in the NFL. To put Miller’s size in perspective here are the following height and weight of some of the NFL’s top OLBs:

At this point the Miller camp will probably point to two player comparisons to help poor Von out (James Harrison and Elvis Dumervil). Even these smaller OLBs, however, are significantly bulkier than Miller (Harrison is 6’0 240 and Dumervill is 5’11 248). Making matters worse for miller is that is frame is not only light but distributed horribly. He is light in the pants and even if he puts on some weight it will not help him much when it comes to anchoring against the run. Bottom line is that you don’t take someone #2 as an OLB if he is incapable of sealing the edge.

Instincts: “going to need time to adjust to angles and overall awareness at the LB position. When aligned at LB during film study did false step on occasion and needs to take better angles with run fits. Flashes ability to recognize screens but can get caught too far upfield against draw plays.”-Scouts Inc.


Productivity: Although miller was productive in college his numbers are deceiving. In 2009 Miller got 11 of his 16.5 sacks against teams with losing records. In fact 8 of his sacks came in his team’s first three games against New Mexico, Utah State, and UAB. His 2009 TFL stats are not much better. Out of his 21.5 TFLs 12.5 came against losing teams and 8 out of his 21.5 TFLs came in the first three games of the season.
Even more alarming than his deceiving 2009 stats is Miller’s drop off in 2010. In 2010 Miller had 3 sacks and 5.5 TFLs 8 games into the season. What the stats tell me is that Miller racks of stats in artificial and non-important ways.


Bottom Line: Miller can become a solid situational pass rusher who has the ability to rack of splash plays in bunches. Someone like Tully Banta Cain comes to mind when thinking about Miller’s prospects in the NFL. Although I value TBC I would not draft him before the early to mid 2nd round. For these reasons above I rated Miller as the 34th best prospect in the 2011 Draft.
Posted by Dave Hendrie at 5:54 PM

why this article is overrrated

second, miller came out of no where in 2009, so by mid season teams knew of him and 2x/3x teamed him.... starting 2010 he had high ankle sprain but was unblock able by seasons end... youtube him vs texxas/ou/nebraska and them tell me how he doesnt make am impact in important games. idiot.

I agree that Dave is an idiot. But not when it comes to Von Miller, he knocked this analysis out of the park. Miller is 6'2 and half and weighed 246 at the combine. Okay so he drank a lot of water before the weigh in. He is still dreadfully small. He came out of nowhere in 2009? He started all 4 years. And he has never been tripled teamed in his life and never will be. Rarely doubled teamed. I can't wait for the Patriots to not draft him.

he didnt play true rush end or "jack" till 2009 ... perhaps not triple teamed but double teamed for sure... he is small by 1/2 inch and maybe 5lbs... i hardly consider that "dreadfully small." and no worried about pats, he wont last that long anyways.

Are you serious? You are overrated and a fucken idoit. Stop writting draft analysis.

so in hindsight, this is probably one of the dumbest articles of all time

Thank you a lot for sharing this with all of us you really realize what you are speaking about!
Bookmarked. Please additionally visit my website =).
We may have a link alternate contract among us

I'm curious to find out what blog system you have been working with?
I'm having some minor security issues with my latest site and I would like to
find something more secure. Do you have any solutions?

Check out my web site ... work out plans Without weights

Way cool! Some very valid points! I appreciate you writing
this article plus the rest of the site is also really good.

Howdy, I do believe your website could possibly be having web browser compatibility problems.
When I look at yor site in Safari, it looks fine however,
if opening in Internet Explorer, it's got some overlapping issues.
I merely wanted to provide yyou with a quick heads up! Apart from that,
fantastic blog!

Feel fdee to surf to my webpage; Knights And dragons hack

Your website must give you a clear message having a goal-oriented direction, setting you
apart from the competition. An attention grabbing attractive website is essential within the technologically advanced and
highly competitive market of current age, for the success
of business. " Employees at Nike are encouraged to become curious and ready to accept new ideas, whatever their source.

This post is genuinely a nice one it helps new web people, who are wishing for blogging.

Howdy I am so glad I found your weblog, I really found you by
mistake, while I was searching on Askjeeve for something else, Anyways I am here now and
would just like to say cheers for a fantastic post and a
all round exciting blog (I also love the theme/design), I don't have time
to go through it all at the minute but I have bookmarked it and
also included your RSS feeds, so when I have time I will be back to read more, Please do keep up the awesome
work.